Ever wondered how many access points are there in your city? Last week I did an interesting thing: Wardriving in my city Lahore.

Wardriving is act of searching for WiFi wirless networks on the go using laptop or other mobile devices. It is legal in most parts of the world but ethically it comes under gray area. I personally do not find anything unethical with it as far as the discovered networks are not misused. Hence I did it :)

I used my HTC P3300 equipped with builtin WiFi and GPS to scan the networks using an interesting PocketPC application called WiFiFoFum. It promisciously looks for wireless networks and records each access point's information (MAC, SSID etc) alongwith geo-coordinates and allows you to later map it on Google Earth for better visualization. It is free as long as you use it for non-commercial purposes.

I war-drove my way from home to office which is 15 kilometers. The areas I passed roughly include Garhi Shahu, Canal, Gulberg Main Boulevard, Cavalry Ground, Walton Road, DHA Main Boulevard and LUMS.

What I discovered was quite surprising. My office is 15 kilometers from my home and in that span I found more than 90 access points. I wasn't expecting Lahore to be that hi-tech! More interesting was the fact that most of these access points were insecure with their default SSIDs such as 'linksys', 'netgear' etc. I did not try connecting to any of these but I'm sure many of them would be using default passwords. Those with named SSIDs suggested that many of the insecure networks were of offices.

Here is a screen shot of Google Earth's mapping at high level. The green ones are insecure while the red ones are those having some level of authentication or encryption. 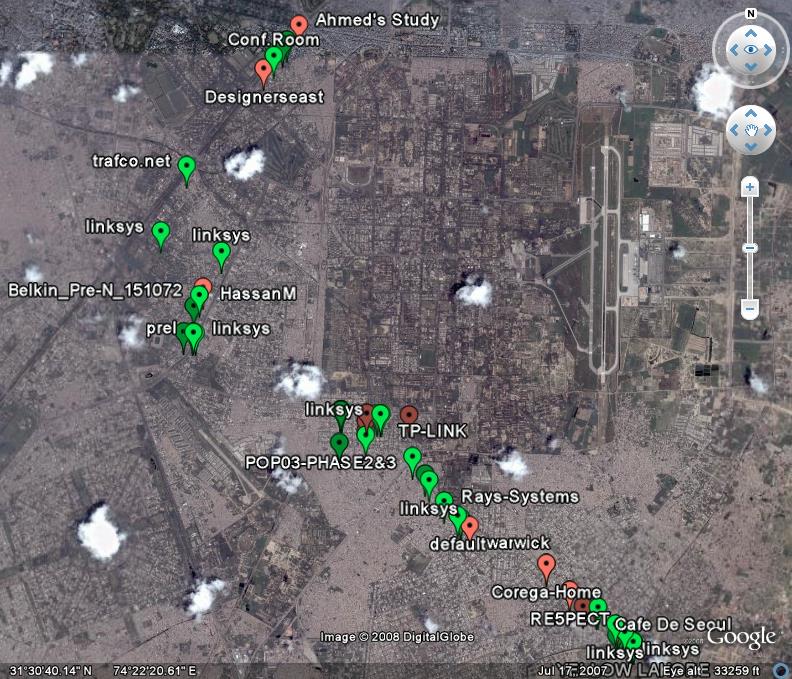 With insecure wireless networks it is very easy for even a script kiddie to steal your bandwidth as well as invade your privacy. Make sure you keep your network secure, or alternatively you can have some fun